The other day me and the kidlets were hanging out, doing our thing and I had the brilliant idea to take one of those many ideas I have pinned on Pinterest and, you know, actually do it. Go me. So I take a peek at the blog post I pinned, and find the instructions to do shaving foam marbling. It is simple enough - a tray, some shaving cream and food coloring. Swirl the food coloring in the shaving cream a bit and then lay some paper over the top. The color is supposed to stick to the paper, making a nice marbling effect. Once it dries, you can cut up the paper and make fun things with it. I had all the supplies, a nice sunny day so we could work outside, and three kids eager to have some fun.

Here's where I say I really wish I would have had my camera out from the beginning, as if I knew I'd want to blog about this little project later. I'd love to have pictures of the kids as they started to swirl the shaving foam around, mixing the colors a little.

The next picture might be a close up of the foam with the food coloring mixing in; maybe another of their little fingers trailing along, making a totally unique pattern, impossible to replicate.

Here, I'd show them gently laying a piece of crisp, white paper along the top of the shaving cream, and lifting it, ever so carefully, revealing the amazing work of art underneath. I'd finish up with some neat shots of all their various pieces, lovingly set aside with little river rocks to hold them down in the sun to dry.

But wait, that was how I thought the project might progress.

Instead, they did this: 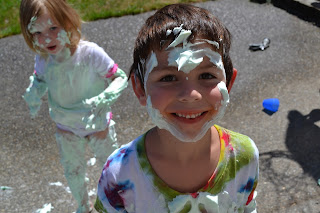 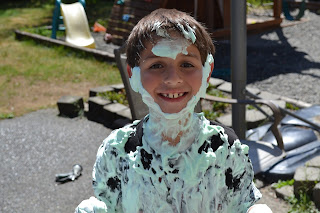 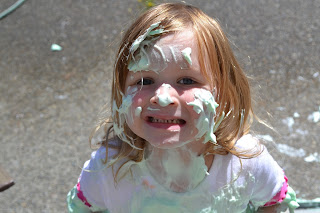 Yes, instead of swirling the shaving foam gently and carefully imprinting it onto paper, they started squishing it in their hands, and that felt pretty neat. So they smeared it up their arms, and that was even more fun. Shaving cream demands a beard, so they painted their faces. And since their arms were already covered, why not their legs as well? Pretty soon they were covering themselves in green-tinted shaving cream from head to toe. 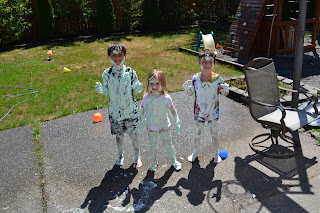 And then they thought they looked a lot like zombies, so they did this: 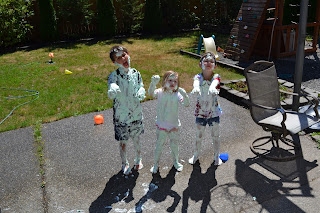 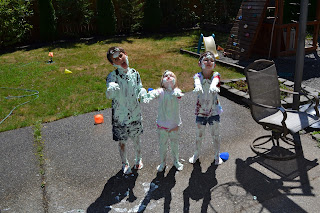 And then Ella chased her brothers around, moaning, "Brains! Brains!" Honestly, I have no idea why my not-yet-four-year-old daughter knows about zombies, nor that they moan and say, "Brains!" I swear, we're not letting them watch zombie movies.

So what do you do with three kids who are covered from head to toe, quite literally, in shaving cream? Turn on the sprinkler, of course! 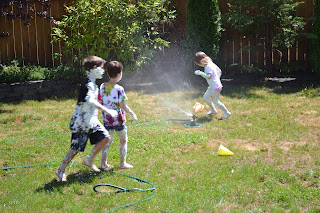 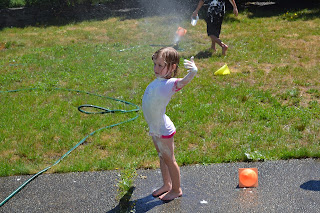 The sprinkler got the worst of it off, but I did have to hose them down myself before they could go back inside. I'm not gonna lie, that was pretty fun. For me, I mean.

Our project didn't quite turn out the way I was expecting, but hey, they had a blast anyway. And really, I should have known. Shaving cream + sunshine + outside just has to = big giant mess. These are my children we're talking about.