I can't take credit for this idea, but I thought it would be fun to share our recent backyard adventure - an obstacle course! I've seen versions of this on Pinterest and various blogs, and thought we'd try our hand at making an obstacle course of our own.

You can throw this kind of activity together with things you already have on hand very easily. I did buy a few things, since our outdoor toy supply is pretty depleted. We got four pool noodles, four small inflatable pool rings, and added some plastic cones, folding chairs, a toddler slide, a pop-up tunnel and a few other things. Easy peasy! 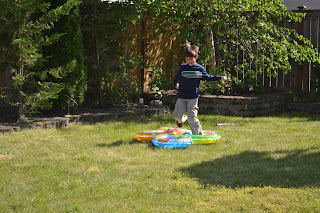 And Ella having her turn.
﻿ 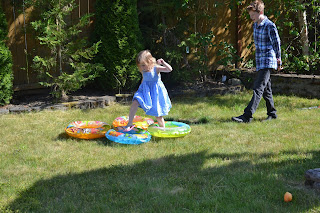 We used the folding chairs to hold up the pool noodles to make an over-under obstacle. They had to jump over the one and crawl under the other. I've seen ideas that have the noodles staked to the ground, forming an arch, but this was way easier. And I like easy. I'm lazy like that.

The kids pulled out an old toddler slide - the big kids jumped off, and the littler kids slid down. The subsequent tunnel was a funny edition for the olders. The little kids crawled right through, but the bigger kids had a tough time crawling through, leading to a lot of laughs as they got a bit stuck.


Later, we added some cones from our flag football stuff. They were supposed to zig-zag around the outside of each cone.


The kids came up with the final challenge - they had three bouncy balls to throw at a target. There was a hula hoop on the ground and they were supposed to hit the pitcher's net and get it in the hula hoop.


This was a great activity that worked for kids of all ages. We had kids from age 12 down to Ella at 3 having fun with it. It doesn't look fancy, but it was a lot of fun and very easy to set up and take down. The kids have made their own versions since we did this one as well, adding random things from the backyard and coming up with various rules (getting dizzy first, etc.). We've timed them to see if they could beat each other's times - a stopwatch app on my phone was great for that.

The weather here is hot this week, so I'm thinking this set up is begging for the addition of a sprinkler or water of some kind! Easy summer fun = win.

Email ThisBlogThis!Share to TwitterShare to FacebookShare to Pinterest
Labels: Just for fun, Summer