Fossils! Our trip to the Burke Museum

Our latest adventure was a trip to the Burke Museum at the University of Washington. David is wrapping up his project work on dinosaurs, and the Fossil Discovery Tour was just perfect. We toured their exhibit, The Life and Times of Washington State, which includes fossils and displays from various eras in Washington. The tour guide was a lot of fun, and the kids got to spend time in the Discovery Lab doing some fun hands-on activities.


The displays themselves were pretty neat and we got to spend some time exploring each area.


Uncle Chris (my brother) joined us for the fun. Yay for an extra set of adult hands to wrangle/carry children!

The fossils included things from hundreds of millions of years ago (mostly sea life, since this part of the world was covered with water for a long time), to the ice age.

The Discovery Lab portion was really great. Our tour guide was awesome, and the kids were very engaged and interested. Their first activity was to work in groups to determine what time period their box of fossils came from. They were able to handle some fossils, and go match them up with fossils in the various displays. The kids did great working together to solve the fossil mystery. They also got to dig in a box of sand to discover the fossils inside, and again worked together to determine which time period their fossils must have come from.

David uncovered a Megalodon tooth in his box. That seriously could not have been more perfect. He'd been hoping he'd see a Megalodon tooth, since those are one of his favorite (giant shark? obviously awesome). It was funny, one of the museum volunteers was so impressed that he knew right away what the fossil was. She was asking our tour leader how big the Megalodon must have been, and the tour leader wasn't sure. But David sure knew. He told them all about Megalodons; I think it made his day to be able to share his info with grown ups!

As if the Megalodon tooth wasn't cool enough, they also got to handle a Tyrannosaurus Rex tooth! 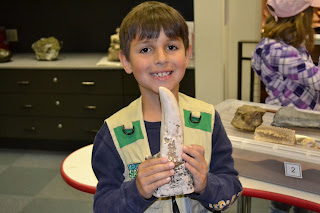 Grayson had a great time too. It is always good when an activity really holds his attention. He did awesome, working with his group and staying engaged the whole time. He found some cool fossils as well. 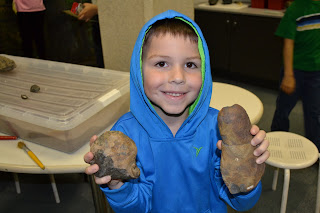 Overall, it was a great experience for all the kids. David has more to say about our day, and something very interesting he ate, but I'll let him post next :).