Ancient Greece and a retelling of the Gordian Knot

Not long ago, we wrapped up our study of Ancient Greece. We're using A Little History of the World as our spine, and added in a variety of other great books - mythology, fables, some fun projects, historical fiction, etc. 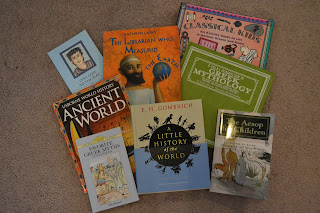 David was particularly taken with the figure of Alexander the Great. We read about his travels and conquests, how he led his army from the forefront and managed to take over more of the known world than anyone before him. David wanted to recreate the story of the Gordian Knot. The story tells of Alexander's visit to a temple in the city of Gordium. In the temple was a chariot, tied with a knot that couldn't be undone. It was said that whoever untied the knot would rule the world. According to the story, Alexander didn't bother attempting to disentangle the knot - he simply drew his sword and sliced through it.

This is the boys' recreation of that story. David dressed himself up as Alexander, and we used an old bed sheet to turn Grayson into a Gordian priest. David set up each picture himself, moving through each scene in the story. Then he dictated the captions to me and I typed them. We printed and bound it as a little book, but we also made this version so we could share it online.

The image is pretty small, but hopefully it is visible enough (if you click on the image, it should get bigger). It's hard to see, but I love the picture of him slicing the knot - Grayson has his hands up in the air and this hilarious expression of surprise. And I love how David ended it with, "I lifted my mighty sword to the heavens. I knew my destiny!" He's already a great storyteller!
Ella wanted to be in the pictures, and actually ruined several because she either jumped in front of the camera, or wouldn't move out of the way. Given that she was wearing nothing but pink panties, a pirate dress up shirt and pirate hat (and refused to change), we had to coax her out of the pictures. I think I bribed her with a popsicle and a turn on the ipad.
I'm pretty proud of their work here - it was a fun little project, and even cooler because it was all David's idea. I love being able to give them the reigns once in a while and let them roll with something.
﻿
﻿
Posted by Claire Frank at 1:08 PM