Part of our day typically includes what we refer to as "project time." I'm implementing ideas from the book Project Based Homeschooling, by Lori Pickert. I was a bit hesitant to read the book initially, because I was afraid it would leave me feeling like I needed to overhaul everything we were doing, or ignore the ideas in the book completely. The reality has been quite different; I found the book very inspiring and the kids have responded with tons of enthusiasm. We still have our regular school work we do each day, but we've added in "project time" and so far, we all really love it.

The idea is simple - they have time, space and materials to focus on something they are interested in. The work they do is entirely their own. I don't assign anything or require anything specific. I am there less as a teacher, and more as a mentor and guide (or as David says, "You're my money and transportation."). This is very much self-directed learning, and what they get out if it is a lot more than content. This is meta-learning - learning how to learn. I don't step in and figure things out, tell them what to do, etc. I help by asking questions, reminding them of things they wanted to accomplish, suggesting ideas, helping them search the internet or read their books aloud. They decide what they make or do with their topic. And the making, well that has been abundant so far!

Currently, both boys are working on dinosaurs. This is no huge surprise - dinos are a perennial favorite around here. We pulled out all the books we already own on dinosaurs, and they have been referring to them pretty often. Then we hit the library and checked out just about every book we could find on dinosaurs (so if you're looking for dino books at our library... sorry). Right away, they both started drawing and making things. We've had salt dough dinosaur nests with eggs, dinosaur drawings, dinosaur posters, and attempts at dinosaur skeletons made from pipe cleaners, just to get things started.

David wanted to know how fast a Tyrannosaurus Rex could run, so he looked it up in our big dinosaur encyclopedia (20 mph). Then he decided to test whether he could ride that fast on his bike (he couldn't).

He also measured the length of a T-Rex's stride on the street and marked it with sidewalk chalk; then he drew feet on either side so we could see how big the stride would have been. Pretty impressive. 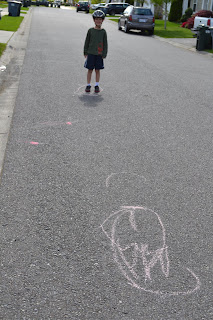 Grayson set to work making dinosaur posters to put all over our house. This one is, "A plant eater who lives in that cave, eating a plant. There aren't too many leaves left because he eats a lot. And there is a volcano over there." Man, I love that kid. 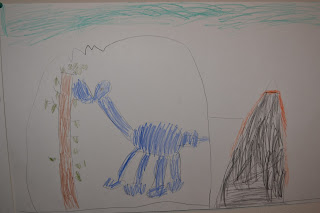 David watched a dinosaur video (that he has probably watched at least 800 times since he was about four), and it reminded him of tar pits. So they made their own tar pits and trapped dinosaurs in them. David wanted to remake a "slime" recipe we made a couple of years ago, but tint it black with food coloring to make it look like dark mud or tar. Grayson went for the cornstarch and water goop, often known as "oobleck". The black of the slime was pretty neat, but the cornstarch goop was much more authentic. It is neat stuff, actually - it acts like both a solid or a liquid, depending on how you handle it. So the dinosaurs got stuck and sank into it, much like they would have in a real mud or tar pit. I think David mostly wanted an excuse to make slime.


David also wanted to make a pterodactyl kite. He looked up instructions for making a simple homemade kite, and modified them to make it pterodactyl shaped. Or maybe it was supposed to be a pteranodon, I don't know. It seems like half the dinosaur names we learned as kids aren't really what they are called anymore. In any case, he took matters into his own hands with this one - found instructions, made a supply list, gathered what he needed, and built the whole thing by himself. It didn't really fly, and we guessed that was likely due to it being rather small. But true to my goals for "project time," I didn't step in and tell him it wouldn't work; I let him figure it out by himself. Now, if he wants to redesign the kite, he is welcome to. If not, that's fine as well. I suspect he's onto more dino-related fun at this point, so we'll see if the kite idea comes back.

The challenging thing for me, with regard to project time, is that they aren't usually doing what I would have had them do. My first instinct with the pterodactyl kite was something along the lines of, "What on earth does that teach him about dinosaurs?" But stepping back, I realize he learned a great deal; he gained experience researching, pulling together and organizing materials, testing ideas, and building something he envisioned in his mind. My goal for their project time is not so much the content of what they learn. I don't expect them to emerge from this topic understanding each era on the timeline, or able to name X number of dinosaurs and on what continent their fossils are found. I do want them to learn more about how to find things out, how to learn something they want to know, and how to use that information in a way that is meaningful to them. And so far, I think we're hitting that one out of the park.
Posted by Claire Frank at 10:45 PM