To school year round or not.... that is the question 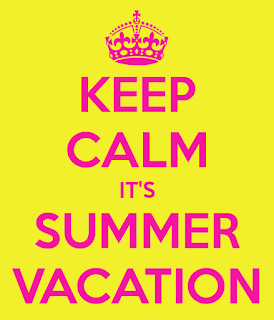 In homeschooling circles, year-round schooling is pretty common. A lot of families decide to continue schooling, perhaps with a lighter schedule, throughout the summer. There are a lot of great reasons to do so. You have more flexibility throughout the school year; you can take days off when you need or want to, knowing you are getting in plenty of school days each year. And the first weeks of fall aren't spent reviewing what has been forgotten over the summer.

Last year by early June, I was feeling ready to be done. I needed a break more than the kids did - a break from planning and preparing and trying to keep everyone on task. So we wrapped up what we were working on, and commenced summer break.

I planned to begin our new school year in August, rather than waiting until September. It sounded like such a great idea. We'd start four weeks early, giving us lots of leeway with our schedule, and less of a break in between to forget everything and get all lazy and stuff. And then August rolled around, and we were all... um, no. It is gorgeous outside, and we want to plaaaaaay! So we took advantage of one of the great things about homeschooling, and changed plans. School began again in September, and we were all happier for it.

This year, as the school year winds down and June approaches, I'm left with a familiar feeling. I'm a little worn out, ready for a break in the routine, and ready to cast off the regular books and lessons and planning and preparation and take some time off. And yet, there is still a part of me that feels like year-round education is such a great idea.

I don't think my kids agree.

The thing is, right now I'm doing this thing I'm good at doing - thinking about a concept "in theory" and not really thinking about it in terms of "the reality of my family." How silly is that? In theory, it sounds great to continue doing some schoolwork all summer, for the reasons above as well as others. But what about my reality? Not the reality of other families I know, or other homeschoolers with pretty blogs - our family. And the reality of our family is, we like summer break. We like taking time off and playing and running around outside. We like the freedom and free time, even when the weather sucks or we get kind of bored. At this point, I think summers off is still the best policy for us. And if that changes sometime in the future, we have the ability to turn on a dime and make that change as well.

Email ThisBlogThis!Share to TwitterShare to FacebookShare to Pinterest
Labels: Our family, Schedule and routine, Summer